In Silico Design of Fusion Toxin DT389GCSF and a Comparative Study


Background: Chemotherapy and radiotherapy have negative effects on normal tissues and they are very expensive and lengthy treatments. These disadvantages have recently attracted researchers to the new methods that specifically affect cancerous tissues and have lower damage to normal tissues. One of these methods is the use of intelligent recombinant fusion toxin. The fusion toxin DTGCSF, which consists of linked Diphtheria Toxin (DT) and Granulocyte Colony Stimulate Factor (GCSF), was first studied by Chadwick et al. in 1993 where HATPL linker provided the linking sequence between GCSF and the 486 amino acid sequences of DT.

Methods: In this study, the fusion toxin DT389GCSF is evaluated for functional structure in silico. With the idea of the commercial fusion toxin of Ontak, the DT in this fusion protein is designed incomplete for 389 amino acids and is linked to the beginning of the GCSF cytokine via the SG4SM linker (DT389GCSF). The affinity of the DT389GCSF as a ligand with GCSF-R as receptor was compared with DT486GCSF as a ligand with GCSF-R as receptor. Both DT486GCSF and its receptor GCSF-R have been modeled by Easy Modeler2 software. Our fusion protein (DT389GCSF) and GCSF-R are modeled through Modeller software; all of the structures were confirmed by server MDWEB and VMD software. Then, the interaction studies between two proteins are done using protein-protein docking (HADDOCK 2.2 web server) for both the fusion protein in this study and DT486GCSF.

Conclusion: HADDOCK web server is operative tools for evaluation of protein–protein interactions, therefore, in silico study of DT389GCSF will help with studying the function and the structure of these molecules. Moreover, DT389GCSF may have important new therapeutic applications. 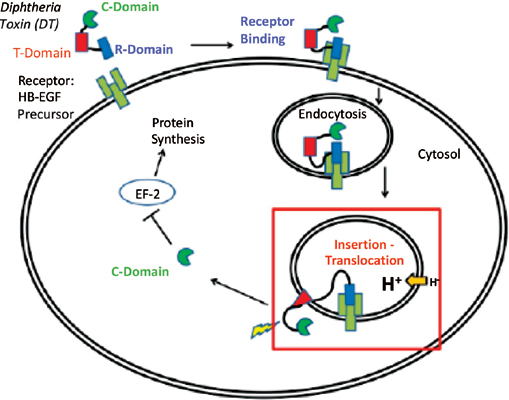