Introduction: Classification models developed in this study can be used as a simple filter in drug modelling to eliminate potentially inappropriate molecules in the early stages. In this work, we developed a Drug Decision Support System (DDSS) to classify each drug candidate molecule as potentially drug or non-drug and to predict its disease group.

Methods: Molecular descriptors were identified for the determination of a number of rules in drug molecules. They were derived using ADRIANA.Code program and Lipinski's rule of five. We used Artificial Neural Network (ANN) to classify drug molecules correctly according to the types of diseases. Closed frequent molecular structures in the form of subgraph fragments were also obtained with Gaston algorithm included in ParMol Package to find common molecular fragments for withdrawn drugs.

Results: We observed that TPSA, XlogP Natoms, HDon_O and TPSA are the most distinctive features in the pool of the molecular descriptors and evaluated the performances of classifiers on all datasets and found that classification accuracies are very high on all the datasets. Neural network models achieved 84.6% and 83.3% accuracies on test sets including cardiac therapy, anti-epileptics and anti-parkinson drugs with approved and withdrawn drugs for drug classification problems.

Conclusion: The experimental evaluation shows that the system is promising at determination of potential drug molecules to classify drug molecules correctly according to the types of diseases. 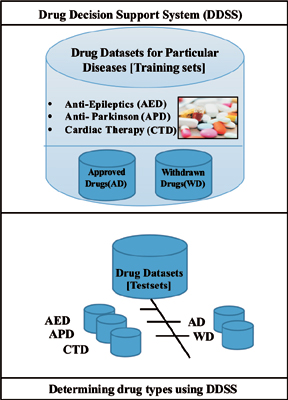