Dapsone is not a Pharmacodynamic Lead Compound for its Aryl Derivatives


Background: The relatedness between the linear equations of thermodynamics and QSAR was studied thanks to the recently elucidated crystal structure complexes between sulfonamide pterin conjugates and dihydropteroate synthase (DHPS) together with a published set of thirty- six synthetic dapsone derivatives with their reported entropy-driven activity data. Only a few congeners were slightly better than dapsone.

Objective: Our study aimed at demonstrating the applicability of thermodynamic QSAR and to shed light on the mechanistic aspects of sulfone binding to DHPS.

Methods: To this end ligand docking to DHPS, quantum mechanical properties, 2D- and 3D-QSAR as well as Principle Component Analysis (PCA) were carried out.

Results: The short aryl substituents of the docked pterin-sulfa conjugates were outward oriented into the solvent space without interacting with target residues which explains why binding enthalpy (ΔH) did not correlate with potency. PCA revealed how chemically informative descriptors are evenly loaded on the first three PCs (interpreted as ΔG, ΔH and ΔS), while chemically cryptic ones reflected higher dimensional (complex) loadings.

Conclusion: It is safe to utter that synthesis efforts to introduce short side chains for aryl derivatization of the dapsone scaffold have failed in the past. On theoretical grounds we provide computed evidence why dapsone is not a pharmacodynamic lead for drug profiling because enthalpic terms do not change significantly at the moment of ligand binding to target. 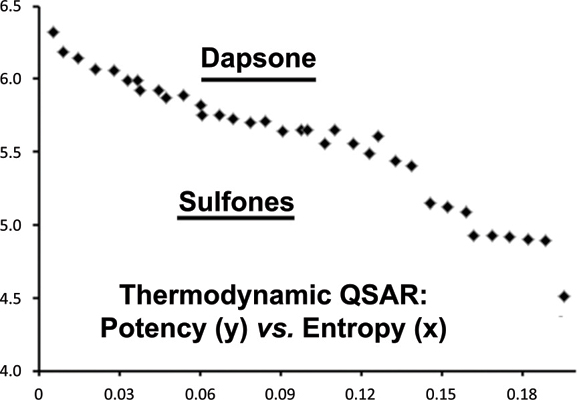