Background: A better understanding of the biopharmaceutical and physicochemical properties of drugs and the pharmaco-technical factors would be of great help for developing pharmaceutical products. But, it is extremely difficult to study the effect of each variable and interaction among them through the conventional approach.

Results: The size of all LNPs formulations prepared as per the experimental design varied between 172 nm and 3880 μm, polydispersity index between 0.033 and 1.00, encapsulation efficiency between 70.8% and 75.7%, and drug loading between 5.84% and 9.68%. The study showed spherical and non-spherical as well as aggregated and non-aggregated LNPs. Besides, it showed no interaction and amorphous form of the drug in LNPs formulation. The Blank NLCs exhibited no cytotoxicity on MCF-7 cells as compared to TMX solution, SLNs (F5) and NLCs (F12) suggest that the cause of cell death is primarily from the effect of TMX present in NLCs. 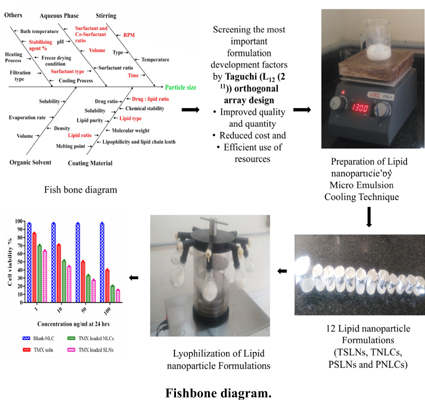