Background: The concept of synthetic lethality is an emerging field in the treatment of cancer and can be applied for new drug development of cancer as already been represented by Poly (ADP-ribose) polymerase (PARPs) inhibitors.

Materials and Methods: Virtual screening carried out using different in silico methods which include molecular docking studies, prediction of drug-likeness and in silico toxicity studies.

Results: Fifteen out of 329 flavonoids achieved better docking score as compared to rucaparib which is an FDA approved PARP inhibitor. These 15 hits were again rescored using accurate docking mode and drug-likeliness properties were evaluated. The accuracy of the docking method was checked using re-docking. Finally NPACT00183 and NPACT00280 were identified as potential PARP inhibitors with docking score of -139.237 and -129.36, respectively. These two flavonoids also showed no AMES toxicity and no carcinogenicity which was predicted using admetSAR.

Conclusion: Our finding suggests that NPACT00183 and NPACT00280 have promising potential to be further explored as PARP inhibitors. 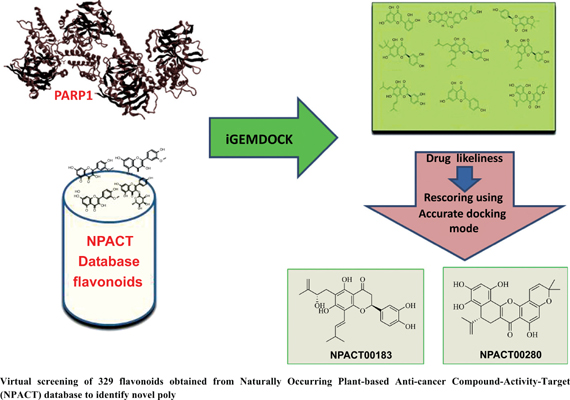