Aim: To screen the zinc database for structurally similar molecules to compound 23 that targets DJ1 for use as a neuroprotective agent for Parkinson’s disease.

Background: Parkinson’s disease (PD) is the second most common chronic neurodegenerative disorder characterized by progressive loss of dopaminergic neurons of the substantia nigra. To date, several proteins account for the recessive familial PD-forms, namely, Parkin, PINK-1, DJ-1, SNCA, PARK2, and LRRK2 Genes. DJ1 is one of the important central points that may be targeted for PD therapy. Recently, Compound 23 has been observed to exert the neuroprotective effect against neurodegeneration in a PD model, but due to its toxic substructure, the hunt for better nontoxic compounds continues.

Objective: The overall objective of our work is to apply in silico approaches to screen structure similar compounds that interact potentially with DJ1 and may serve as a good therapeutic molecule for PD.

Methods: Initial data mining was done from the zinc database and then screened compounds were additionally screened with toxicity checker, carcinopred, ADMET analysis and docking analysis.

Results: The basic screening of database for structurally similar chemicals to compound 23 resulted in 50 compounds, which were further screened to twenty-three and finally seven compounds have been screened based on the toxicity and carcinopred test. Later, the seven compounds were docked and analysed for docking efficiency with DJ1. Our result of molecular docking and molecular simulation analysis highlights Molecule 42(SS2) to exhibit best binding affinity against DJ-1 protein target and can be proposed to be used as a therapeutic agent to modulate neurodegenerative proteins. 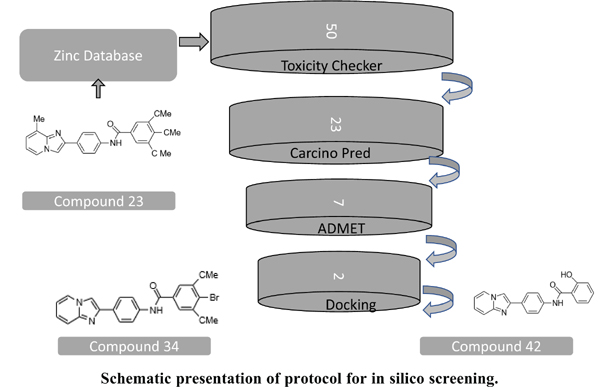