Effect of the Intramolecular Hydrogen Bond on the Active Metabolite Analogs of Leflunomide for Blocking the Plasmodium falciparum Dihydroorotate Dehydrogenase Enzyme: QTAIM, NBO, and Docking Study


Background: Leflunomide (LFM) and its active metabolite, teriflunomide (TFM), have drawn a lot of attention for their anticancer activities, treatment of rheumatoid arthritis and malaria due to their capability to inhibit dihydroorotate dehydrogenase (DHODH) and Plasmodium falciparum dihydroorotate dehydrogenase (PfDHODH) enzyme. In this investigation, the strength of intramolecular hydrogen bond (IHB) in five analogs of TFM (ATFM) was analyzed employing density functional theory (DFT) using B3LYP/6-311++G (d, p) level and molecular orbital analysis in the gas phase and water solution. A detailed electronic structure study was performed using the quantum theory of atoms in molecules (QTAIM) and the hydrogen bond energies (EHB) of stable conformer obtained in the range of 76-97 kJ/mol, as a medium hydrogen bond. The effect of substitution on the IHB nature was studied by natural bond orbital analysis (NBO). 1H NMR calculations showed an upward trend in the proton chemical shift of the enolic proton in the chelated ring (14.5 to 15.7ppm) by increasing the IHB strength. All the calculations confirmed the strongest IHB in 5-F-ATFM and the weakest IHB in 2-FATFM. Molecular orbital analysis, including the HOMO-LUMO gap and chemical hardness, was performed to compare the reactivity of inhibitors. Finally, molecular docking analysis was carried out to identify the potency of inhibition of these compounds against PfDHODH enzyme.

TFM acts as an inhibitor of dihydroorotate dehydrogenase (DHODH) and Plasmodium falciparum dihydroorotate dehydrogenase (PfDHODH) enzyme. Leflunomide and its active metabolite teriflunomide have been identified as drugs for treatment of some diseases, such as multiple sclerosis (MS), rheumatoid arthritis (RA), malaria, and cancer. Hydrogen bonds play a key role in the interaction between drugs and enzymes.

Objectives: The aim of the present work is to investigate the effect of the strength of intramolecular hydrogen bonds (IHBs) in the active metabolite analogs of leflunomide or analogs of teriflunomide (ATFMs) and study the interaction of these inhibitors against the PfDHODH enzyme using quantum mechanical methods.

Results: All the computed results confirm the following trend in the intramolecular hydrogen bond strength in five mono-halo-substituted 2-cyano-3-hydroxy-N-phenylbut-2-enamide (ATFM): 5-FATFM> 4-Br-ATFM ≈ 3-Br-ATFM>3-Cl-ATFM>TFM-Z>2-F-ATFM which is in agreement with QTAIM, NMR, and NBO results. Docking results show that 5-F-ATFM (EHB=97kJ/mol) has the minimum MolDock score due to its considerable IHB strength.

Conclusion: For strong IHBs (EHB>100kJ/mol), C=O and O–H group are involved in the intramolecular interactions and do not contribute to the external interactions. Also, the docking study revealed maximum binding energy between TFM-Z and PfDHODH enzyme. 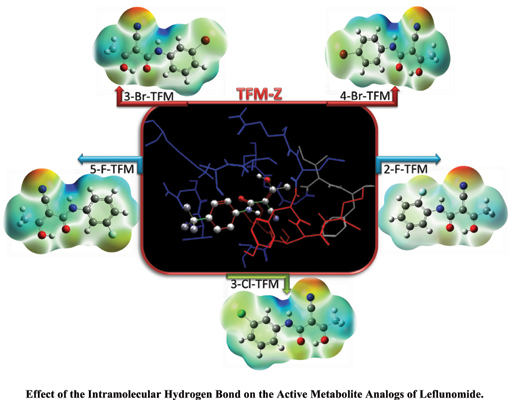